Although all modern winged insects bear two pairs of wings, many structural, functional, and morphological differences exist between forewings and hindwings both Within and between species (Fig. 5.12). For example, the wings of dragonﬂies (Odonata) appear rather similar, but the forewings of beetles (Coleoptera) have been modiﬁed into hardened coverings that protect the hindwings. Butterﬂy (Lepidoptera) forewings and hindwings are often of similar size, but have evolved different shapes and color patterns. In ﬂies (Diptera), the hindwing has been reduced to the haltere, a small balancing organ with a different biomechanical function. 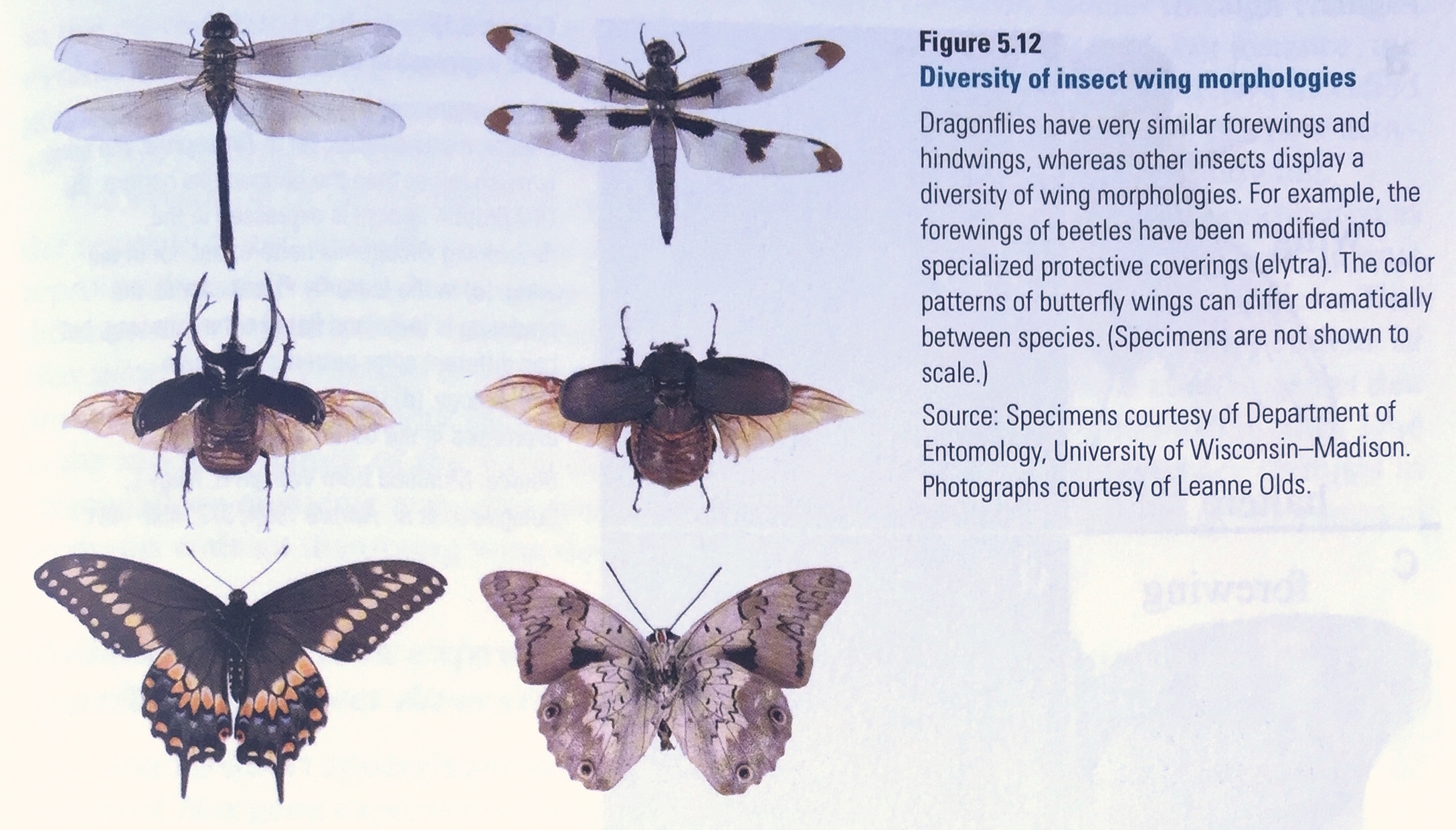 The Ubx gene regulates the differences between forewing and hindwing patterns within species. Ubxis expressed in the developing hindwing of all insects studied, and it controls hindwing-speciﬁc patterning (Fig. 5.13). Yet, the hindwings of different insects such as butterﬂies, beetles, and ﬂies are all different from one another. This diversity reflects the regulation by be of different sets of target genes in each animal. 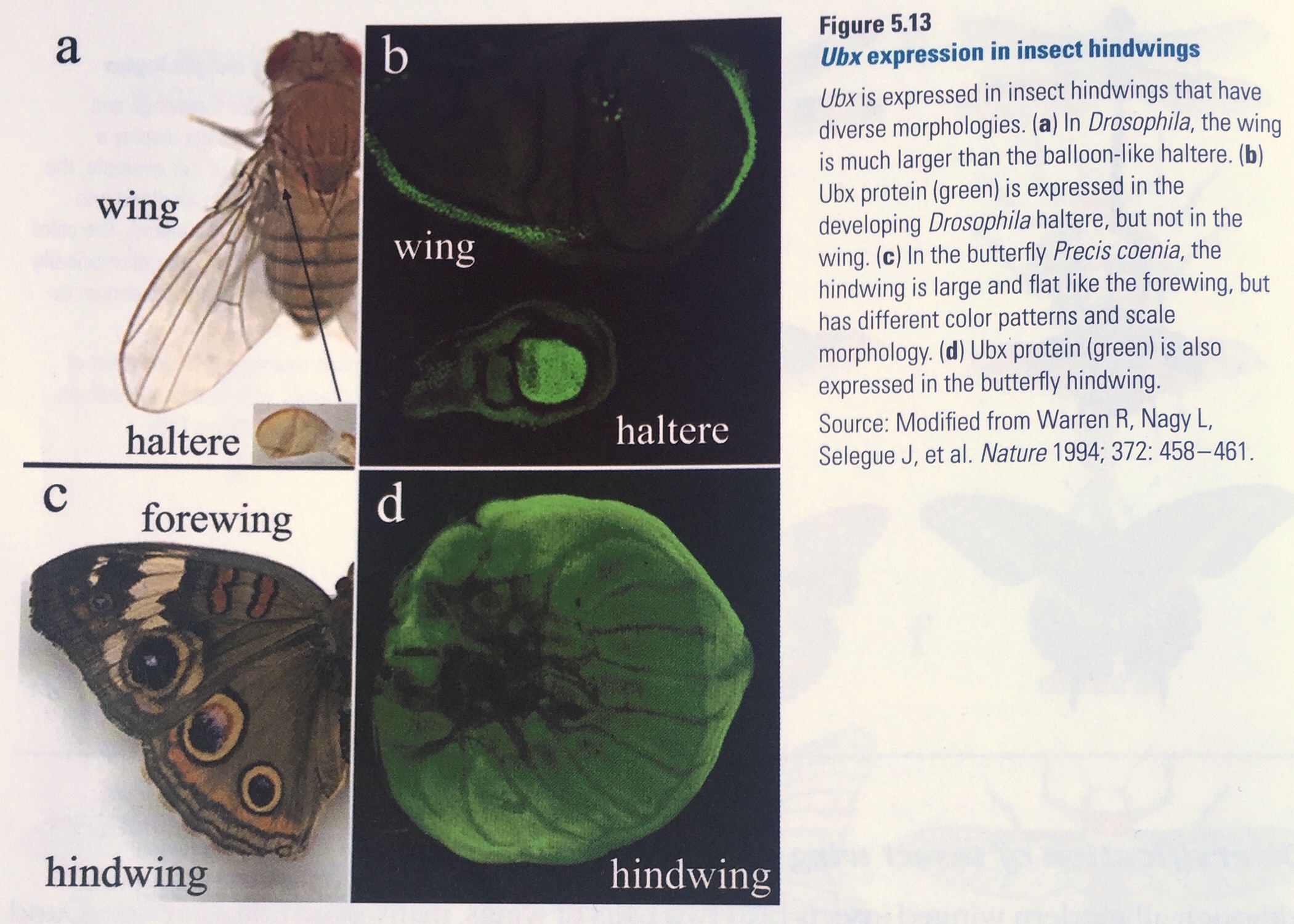 In the Drosophila haltere, Ubx represses the wing-patterning genes that are required for the growth and ﬂattening of the wing and for the development of wing veins and sensory organs. By contrast, Ubx does not repress the orthologs of these genes in the butterﬂy. The butterﬂy hindwing is large and ﬂat, and it has similar venation and sensory organ patterning to the forewing; the developmental program that controls these features is deployed in both wing pairs. In certain butterﬂies, Ubx regulates target genes that control the wing shape, color pattern elements, scale pigmentation, and scale morphology- all feature have no counterpart in the fruit fly. Thus the homologous hindwings of flies and butterflies have evolved distinct morphologies in part because of independent changes in the regulatory connections between Ubx and genes in the wing hierarchy (Fig- 5-14) 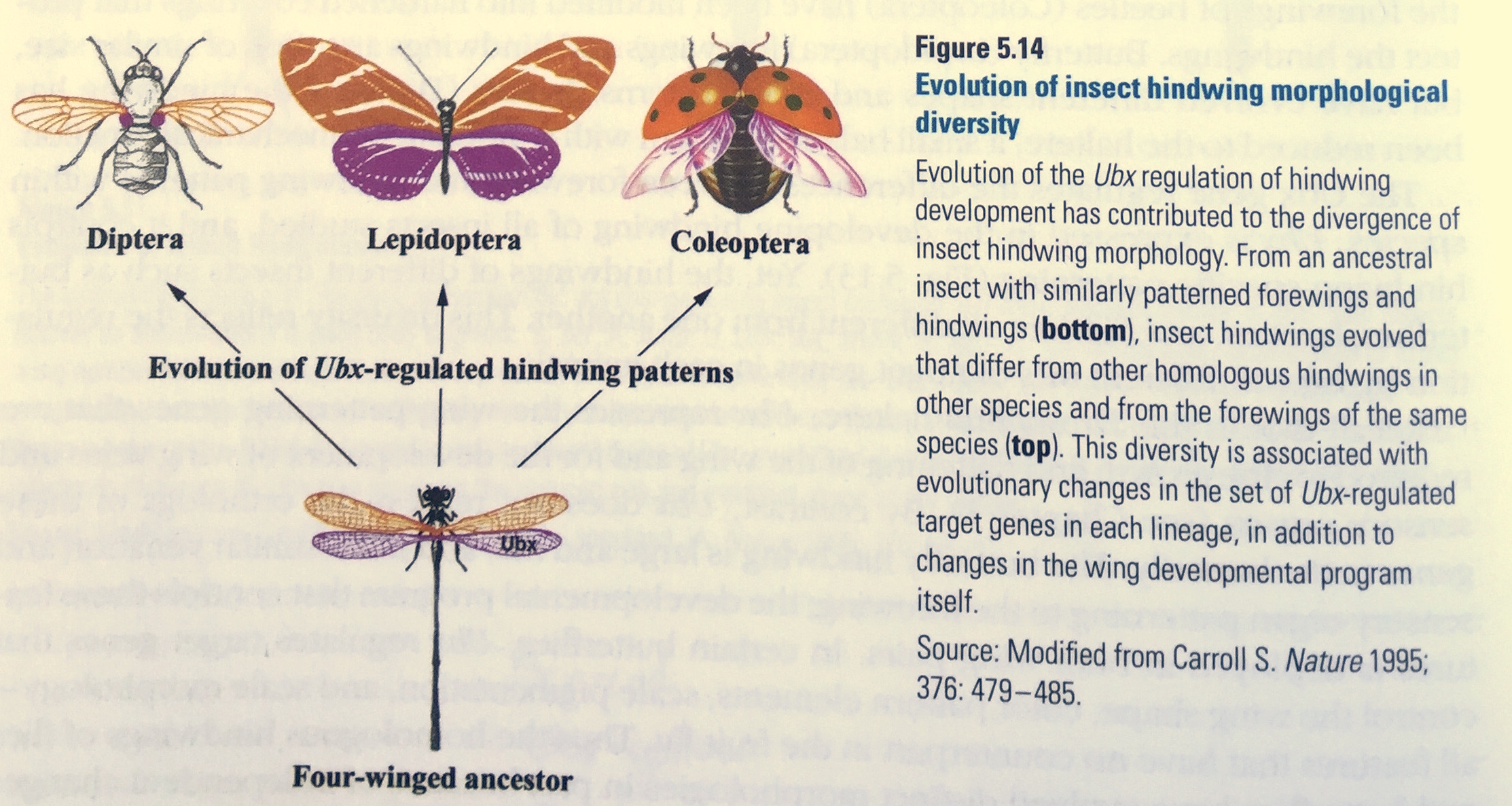 Sets of Ubx-regulated target genes may have diverged between species through changes in cis-regulatory elements that control gene expression in the wing field. For instance, the evolution of Ubx binding sites within a wing-specific cis-regulatory element could have been modified gene expression in the hidwing in a given lineage. Alternatively, the evolution of a new activating Ubx binding site could have created a novel expression pattern in the hindwing.

The evolution of developmental responses to enviromental cues has also contributed to the regulation and evolution of insect wing morphology and number. For example, in ants reproductive individuals have wings while the worker soldier castes are wingless. This difference is regulated by hormonal and enviromental signals that are independent of *Hox* gene input. Evolution of cis-regulatory elements reponsive to these cues in genes that promote wing development may underlie the evolution of wing polyphenism in ants. Due to the modular nature of the wing development heirachy, such evolutionary changes in cis-regulatory elements may alter wing formation and morphology in some developmental programs without distrupting wing development entirely.